Fun in the Sun

I don’t know how these things happen, or I do, and it is not surprising. This penis of mine has led to many bad decisions in the past. I had a big to-do list of things to do on this day off from work, some of which I have done, none of them terribly taxing, and none of them the important things that were on my to-do list. And yes, I should probably get going on those things if I am to accomplish them or even to start them today, it already four something in the afternoon, hours of this day, hours of productivity lost to masturbating. A frequent storyline on this show.

So it started off with me watching this Francois Sagat clips on his website, following a link on Fleshbot that mentioned him today, watching his rather fascinating video pieces on his personal site. Really check them out if you are looking for some sexy, mildly intelligent videos to watch. Watching them has endeared this sexy person with the ridiculous skull tattoo even more to me. And I was just trying to find more videos of him, more scenes of him engaging in sex with people on various sites, itsallgay.com, xtube.com, etc. I eventually gave up, not finding things of good quality or things that particularly turned me on. I started watching videos of guys pissing in public, generally all bad videos of a penis (rarely a body, even rarer to see a face) pissing in some public bathroom. Occasionally, I would find something that for whatever reasons turned me on, some guy pissing on the street at a gay parade or something. But the amount of pages I had to scan through to find even one video that made me hard, that was something I wanted to jerk off to, was more and more killing my desire, my getting off became more and more protracted, and maybe that is what I wanted, maybe I didn’t want to work on these things I had assigned myself to do today and so instead set for myself these difficult parameters to jerk off to, to force myself into searching for hours through short videos, trying to find something to satisfy my sexual hunger.

On the top of one of these search pages, a banner ad, an insanely sexy banner ad. A bunch of naked guys on a soccer field with socks over their cocks and women before them punishing them. A photo of a really sexy couple naked on some South Florida beach, high rise condos in the background, a bright blue sky. This beach photo enchanted me. I wanted to see more of this photo, other images like it, a video even that it was a still from. I clicked on the banner ad and was taken to Bang Bros. There, I searched the term “beach” and found this photoset entitled “Fun in the Sun.” I watched a brief preview of the set, enough to titillate me and then was given the option to join and see the whole video for only $1. One dollar for a two-day temporary membership. I shouldn’t, I told myself. Don’t do it. Write these things you were supposed to write and channel your sexual frustration into that. This is not what you need to be spending your money on. And of course, I went ahead and entered my credit card information and signed up for this cheap temporary membership. I was quite excited, was going to finally get off watching this video, logged in, and went back to this set.

Now I was told that I could only see the first 25% of the video, not even the sexy beach part, that I would have to upgrade to a full membership to see it, that trial members were only teased with all these things that were roped off for full members. And I groaned in frustration, my desire to see this couple on the beach becoming a bit overwhelming now at this point and me really wanting to see this video, not wanting to go back to scrounging through xtube again when I wanted to see was clearly right here. And so yes, maybe I did click on that button allowing me to upgrade to a full membership for only $39. And yes, the video was insanely hot to me. I did get a really hard boner and did jerk off, for the second time today (a bit unnecessary really and further proof that this was perhaps some subconscious way of me creating distractions, reasons to not be productive).

I felt terribly guilty afterwards, could not believe that in some fog of horniness I spent so much money on such a temporary pleasure. Or I can believe it, but wish it weren’t so, wish I weren’t so prone to doing such things.

A Well Made Bed

The guy's apartment was in one of those massive apartment complexes on West End Avenue. I thought that I had been there before. Something about the place looked familiar, however he did not. The apartment was like that of lot of old people's. Things were neat, wooden furniture seemed too polished, everything in its place, nothing lying around, no mess of papers, framed photographs on side tables. I really had the sense that I had been in that apartment before but sometimes things just look that way, like some place you have been before. But also I wondered if maybe I have not been in so many random apartments of men at this point that I may not even remember people. Had I maybe seen this man years ago and blurred his face together with that of so many other random men? I wasn't sure. He was quite old, had stitches down the front of his chest like he had had heart surgery recently. He was bald and had really nice eyes, really soft and flabby skin, loose, and yet real pleasant to touch. He sucked my dick and kissed my feet in a way that made me look at them like they were really beautiful, made me kind of see what he saw. We kissed. It was nice. I came home.
at 10:39 PM 0 comments 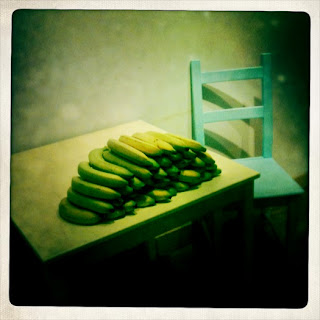 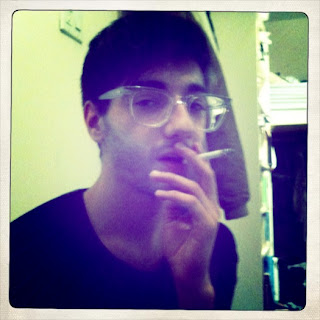 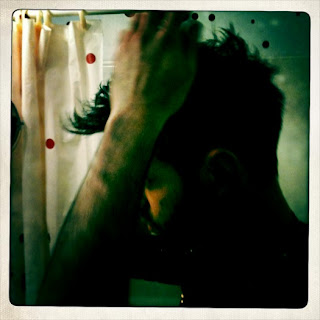 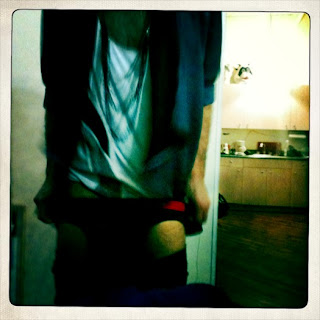 At the Armory show, there is this installation of a very long bookshelf, the books on it arranged alphabetically, all the books part of the same "After Dark" series, the name of a various city and then the words "After Dark," sometimes real ridiculous cities that you would not imagine to be included in such a series. I am now wishing that I had asked the people in this particular booth more questions about the work, as now that I am googling it, I am unable to find out answers to particular questions I am having about the work and the books. The work is by Richard Prince, something I did not know when I first encountered it and was so drawn to it. I am glad I did not know that, as the name has a lot of baggage and I've never been able to really get into his work before and so probably would have dismissed this "After Dark" piece as another work I didn't really get from this big name artist. However, there is something quite beautiful about this piece, all of these individual books with absurd captions on the front cover, a fake library, an imagined one.

One such caption for a city I can't remember, perhaps "Bangalore After Dark," went something like this (a game of telephone happening here with me not remembering the caption at all, only its punchline): "The student became deeply uncomfortable and asked the professor to repeat his statement. 'The sun and life will die out in a billion years.' The student breathed a sigh of relief and said, "You're really had me worried. I thought you said a million years.'"

I am seeing in some basic googling now that Prince did a series of paintings based on these paperback After Dark books that he had been collecting about various cities. My question however is about the books in the piece. They all seem manufactured for this particular work, the captions too absurd, the price of the paperbacks too low for the new condition of the books. I have so many questions about this work that will probably always go unanswered now, the likelihood of me returning to the Armory show this weekend very slim. And so my reading of this, the associations I am attaching to it, may be wrong. These may be found objects arranged on a bookshelf, not the imagined, fanciful series that really touches me.

There are some really striking works in the exhibition, but I got the same feeling I get every year going to this show, and after about an hour of looking at work I became less and less receptive to the things, gave each piece less and less time to make an impression on me before I moved on the next booth, the next gallery, the next works of art. From there, I went to the Scope art fair, and now feel thoroughly exhausted with visual art for a while, especially with having attended the Whitney Biennial a week ago. I have seen some nice things, have a feel for what certain artists are doing, have some new names of people to look for in group shows, and that is it. I was with a boy today and that is probably more what I will remember about this day in some distant future day, walking around these covered piers with Jacob and looking at things, and sharing the only empty chair in the cafe area so we could try to sit and drink a coffee.

I saw this other boy I used to sleep with there, also this young boy, also 20 I believe. I saw him in the Peres Projects booth (typical) where Terrence Koh had a couple pieces. He was with some other boy and was slightly cunty, perhaps for good reason, perhaps I was an asshole to him some time ago. I thought about age briefly, about boys, about paths crossing, and then said "nice seeing you," the politest way of escaping a situation, starting to roll the credits.