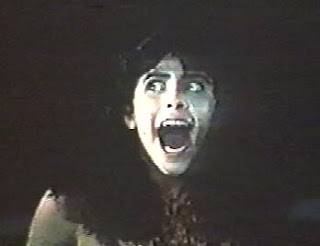 I watched this movie last night, and if you haven't seen it, stop reading.

This horror film from 1983 has some crazy stuff going on in it with gender, homosexuality, and trans issues. I don't know what to make out of any of it, but the ending is totally batshit crazy, and I played back the scene a couple of times last night, loving it so much. The film itself is kind of slow-going, not gruesome or suspenseful enough, but the ending really pays off. What a beautiful final image of Angela that closing shot is!
at 12:00 PM