On the train right now riding from Manchester to London, a whir of green English countryside passing me by, rolling hills, sheep, cows, and trees. The Bjork concert that brought us there, the original impetus for this trip to Europe was really beautiful. It was held in Campfield Market Hall, this old Victorian warehouse structure. It was quite hot inside and everyone stood in the round listening to Bjork perform, to crazy instruments, and to a twenty person Icelandic choir. It was absolutely amazing. She played all of her new Biophilia songs, only one of which I knew. And those were nice to hear, but with Bjork, it usually takes me a few listens to warm to one of her songs and so those did not have nearly the same effect on me as when she played songs from earlier albums. I kind of lost my mind when she played "Isobel," which used to be my favorite song of hers when I was in high school. She also played a gorgeous stripped down version of "One Day" that totally had me swooning.

From that concert, we went to Canal Street to meet up with Toby who had come into town to hang out with us for a bit. A blur of gay bars from there, Manchester a really fun gay city to go out in. All the gay bars are in a long strip along a pretty canal. Drinks are cheap and everyone rages. We stayed out very late, dancing, drinking, and talking to various boys. The three of us met this cute Irish boy and the four of us all went home together. Slept in the next day, ate a full English breakfast (black pudding!), and wondered around town for a bit. We then rested a little more and went to Salford to take my picture in front of the Salford Lads club (Smiths pilgrimage!) and then went to the Lowry to see the Marina Abromovic opera. Unfortunately, I had taken some Benadryl beforehand because my allergies were so bad that I could barely breathe. This caused me to nod off throughout the opera, which was really gorgeous, but also incredibly boring. Antony sang a few songs, which were really love to hear, but I was in no state to be sitting through any opera, let alone a contemporary one about Marina Abromovic. We then went out again to some gay bars in town. Lots of drag queens in the town of Manchester, roving in packs. Cute boys in ugly clothes. Cheap drinks.

This is how it feels to party in Manchester: 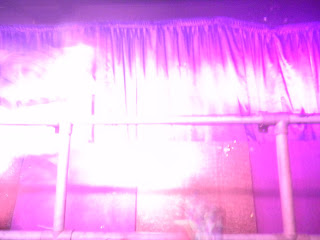