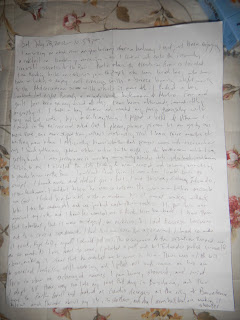 Sat July 28, 2012 10:53pm
I am sitting on a bed near an open balcony door - a balcony I had just been enjoying a cocktail on - bodka y naranja - as I looked out on to the insanely beautiful streets of the Barri Gothic where the Hosteria Grau is located. I am thinking back on centuries, on the people who have lived here, who have been so lucky to enjoy cool evenings with a breeze bearing slight scents of the Mediterranean sea with which it came off. I fucked a boy bareback last night for only a minute in the backroom of Metro. Fear and guilt have been on my mind all day. I ran home afterwards, immediately regretting it. I took a long shower and washed my penis thoroughly with soap and hot water, hoping to kill anything. I popped a fistful of Vitamin C. I cried in the mirror and asked God to please, please, please let me get by one more time, one more stupid time, without contracting HIV. I have three months of waiting now before I officially know whether that prayer was well-recieved or not. I had gotten my phone stolen earlier in the night in the backroom while I was getting head. I was pretty sure it was by some sexy Nordic dude who had just been talking to me. I circled the club looking for him, crazed and insane, wanting to punch him in the face. I couldn't find him. It was a loss I would have to accept. I drank more and didn't give a fuck. I met this sexy Cuban, Eduardo, in the backroom. I couldn't believe he was so into me. He was some Latin muscle sex God. I fucked him for a bit with a condom but it wasn't working without lube. I tore the condom off and we jerked each other's cocks. He put his ass against my cock and I knew he wanted me to fuck him bareback. I knew that I shouldn't, that it was so stupid, so reckless, but I did because horniness and this crazed sex monster I had become won the argument. I tried to make it quick, kept telling myself I should pull out. The wrongness of the situation turned me on so much. As I was about to come, I started to pull out but Eduardo pulled himself closer, making it clear that he wanted me to come in him. There was a little bit of survival instincts still working and I pulled out and came on his ass. This is when we exchanged names. I ran home, showered, and cried. I slept till three, way too late my last full day in Barcelona, and then I went to Parc Guell and looked at Gaudi's designs, at the city of Barcelona below and thought about my life, its shortness, and why I seem hellbent on making it shorter.
at 10:53 PM