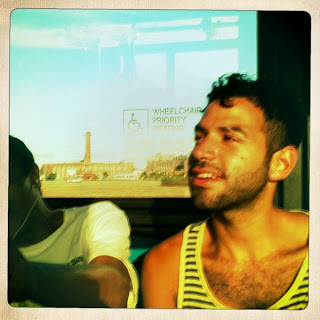 We were on the Q35 bus, riding back from Riis Beach. Diego and I had rushed on to the bus and managed to get seats. Nick was forced to stand, no seats left. The sun was on its way down behind me, it close to 8 o'clock, the entire day spent at the beach, riding waves, diving underneath them, rubbing the dick of some Italian underneath the water, him telling me to be discreet, that this his sister was in the water nearby. We had gone through a bottle of vodka, and that along with all the sun had exhausted me, but in a spent, beautiful way, feeling relaxed and content, a nice meal of a day. As we drove parellel to the beach, the sun was doing amazing things as it neared the horizon, and filling up the bus with a warm, orange glow, making the experience seem magical.

I wanted to capture it. When there is so much beauty, I want to contain it, somehow give it a longer life than the transitory several second long nature of the thing. Sometimes I will try to write about it, capture the thing on paper. Other times, I want to/need to take a picture, try to document the thing. I pulled out my phone and was trying to capture this light on Diego's face, who was seated across from me, tried to frame the beauty I saw, the beauty that the huge window frames of the bus, wide and tall, enabled. I was in a hurry to do so, knowing that the light was going to shift once we turned over the bridge, need to do this quickly. I took one picture, the frame above, before the man on the edge of the picture put up his finger, wagged it at me, and told me not to take pictures. I was shocked. I was in a rush against time, eager to capture this beautiful moment of my friend and this man told me to stop, to not capture the beauty. I told him to chill out, that I wasn't taking a picture of him, and that I was well within my rights to take photographs of my friend. He told me he was warning me. Warning me for what, I said. Back and forth, the verbal volleys and threats went, bounced across the aisle. I took another picture, enraging him more. I started to yell obscenities, every other word a Fucking or an Asshole. It was really nearing the point of a fight, the entire bus looking at us, when the bus driver pulled over the bus, stood up to walk toward us, and told us both that he was going to kick us off the bus if we didn't behave. I am just taking a picture of my friend and this man is being insane, I tried to tell the bus driver. He wasn't having it, told us both to cool it, that we all just wanted to get home. While the bus driver was talking to the crazy man who had ruined these moments I wanted to document, I took another picture aimed in his direction to hopefully goad him on while the bus driver was there.

We both kept silent after our warning from the bus driver, the bus filled up with more people, thankfully blocking my view of this guy for the duration of the ride. When we arrived at the Flatbush subway stop, everyone exited, and he apologized to me. I accepted his apology, had thought the whole thing was now an absurd comical incident.

The glowing light of late afternoon in that early part of the bus ride was something I wanted to ruminate on, contemplate, tease out. I was pondering the beauty that this world will sometimes present to you, and the world, joker that it is, interrupted this rumination on beauty with the entrance of ugliness, with distraction. It's often how these things go though.
at 1:32 PM