Talking Heads - "This Must Be the Place (Naive Melody) 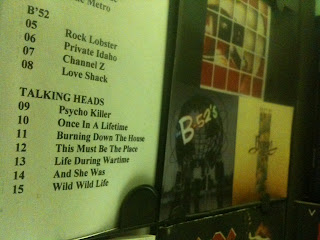 It was about nine or ten years ago. I know it was shortly after moving to New York sometime in 2003. I had been hanging out with Megan and some other people at Blue and Gold on East 7th Street. Over the jukebox came a song I had never heard before. The singer was talking about Home, a place he wanted to be. The song was full of nostalgia and hope and sadness. I was feeling rootless at the time, wanted that feeling of home, of belonging to a place, to something. I was madly in love with New York at the time, was going about the process of making it my home, wanted it to be. This song really helped me realize that it was my home, that it was where I was present, and that I needed to acknowledge it as my home.

"Home is where I want to be, but I guess I'm already there."

I ran to the jukebox to see what the song was, matched up the numbers with what album and what track were playing. I saw that it was the Talking Heads, "This Must Be the Place (Naive Melody)." I went home and downloaded the song soon after and listened to it again and again.

I found myself at Blue and Gold again yesterday. I have been thinking about the idea of home a lot lately, the one I had created nearing its expiration date, maybe already having passed it. I had created a home with Jacob, a safe space that I felt I belonged in, a place imbued with all those notions of comfort, safety, and love that constitute the somewhat porous concept of home. We are parting ways by the end of October and will pack up all these things sometime soon, split up the shared positions, and be on our way to something else, something that I can hopefully soon make a home. I'm not sure if that place will be in New York, whether it will be with a roommate, whether it will be by myself, what neighborhood it will be in, anything really. Where my home will be is one big looming question hanging over my life right now. That's okay. Questions without answers are fine, maybe even a good thing. Something to work towards answering.

I was with some friends from work. We ended up there because we wanted cheap drinks and someone had suggested the bar. Once there, once a bit drunk of their shot specials, Dan wanted to play stuff on the jukebox. I went over to look at the choices within him and became overwhelmed by the memory of that day nearly a decade ago when I first head that Talking Heads song on this jukebox. I wanted to see if they still had it. Magically, it was still on the jukebox. We played it and I occupied a moment in the same point on a circle I had some many years ago, unsure of where I was in the world, but made just a little less unsure by the comforting wisdom of David Byrne.

"I am just an animal looking for a home
Share the same space for a minute or two"
at 11:00 AM