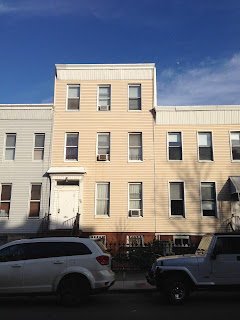 Today, I made a pilgrimage to a site I have wanted to visit since I first read about it a couple of years ago. This ordinary looking house in Clinton Hill, one block from the BQE, is where Walt Whitman lived for a brief time, a little less than a year. But the year in which he lived there was the year in which American literature changed forever, 1855 - the year he published his first edition of Leaves of Grass. It was to this same house that Ralph Waldo Emerson sent his letter greeting Whitman "at the beginning of a great career. Whitman lived in this house with his father and mother. His father died in this house. It was here that he resided as he readied the final proofs of Leaves of Grass and it was here that he lived when the beautiful book was released into the world.

It does to take a bit of imagination to strip away the vinyl siding and the third floor which was added later, but once one does, it is a magnificent experience to stand before this building. It is an anonymous building. There is no plaque anywhere - nothing announcing the importance of this spot. It's doubtful that most people walking down this block have any clue who once occupied this house.

As I approached the house, I got chills, thought about even turning back, wasn't sure I was ready. I started to cry a little with joy as I walked down Ryerson Street, knowing that Walt Whitman used to walk down this same street on his way to or from his house, probably with the very first copies of Leaves of Grass under his arm. This is the only house still standing of the many that he lived in during his time in Brooklyn and sadly (insanely) it's not landmarked, given how he lived here during such an important year in his life.

I took some pictures and dreamed about how awesome it would be to live in this house, how lucky these apartment dwellers were. I wondered if they even knew how lucky they were, what they were living in. I wondered if there were any gay guys that lived there, thought about how awesome it would be to have sex in this house, added this to my already quite long list of things I would like to accomplish, and walked back to the subway.
at 5:37 PM